Back in the 70’s there was a band called Deepwater, won the Battle of The Bands, produced a record, it played on WAMS radio. Then one night they were offered a record deal, and quickly broke up! Tony, Doug and Bob, were all in that band.

Then in the 80’s, there was a band called TEEZE, they played all the clubs in Delaware, some in PA and Jersey and had a great following. Top 40 Dance and Rock & Roll band, Tony, Bob, Tammy, Mark and Kenny were all in that band. And as all bands do, the band broke up.

Some went off to play with other bands and some stopped playing for awhile, a long while. Then Tony and Doug found themselves playing again in a band called The Committed, they met Dan there and when they needed a bass player, Tony brought in Bob.

There were some extra practices between the friends and Tammy pitched in to help, invited Kenny down and a new band formed. By sheer coincidence we met Dave. And See Alice was born. Mark joined us a few months later

Yup, the name is intentional since all the guys are a little more mature, we thought it was funny, thanks for the good joke Kenny, which led us to the band name.

So here we are, having fun, happy to be playing music together and hope others will enjoy it too. Thanks for reading. 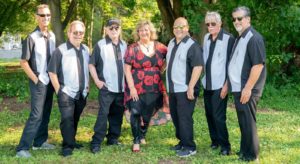